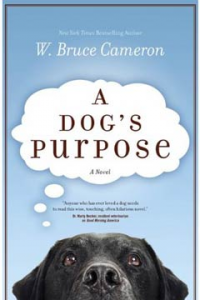 Some of you may have heard of the new book that fairly recently came out called A Dog’s Journey. It’s a sequel to the book A Dog’s Purpose, and together, they are a couple of the best books I’ve ever had. I felt I should review A Dog’s Purpose first, which, like its sequel, is told completely from the perspective of a dog. This circumstance has an interesting twist, though, so read on!

A feral dog has puppies in the wild, one of which is the narrator. This dog is captured by a woman who owns dozens more and keeps them all in a yard illegally. The dog, named Toby, breaks his leg and soon afterward, the dogs are confiscated by the pound, and Toby is euthanized because of his injury. Soon before his death, Toby realizes that he never found any purpose in himself.

But the story doesn’t end there. To Toby’s surprise, he finds himself being born again, as another puppy! Toby has been reincarnated, and he believes it’s because he’d never fulfilled his purpose. He escapes from his mother and goes exploring around the town. After a series of events, a woman finds him and takes him home, where her eight-year-old son asks to keep him and renames him Bailey. As Bailey adventures through multiple lives in both this book and its sequel, he tries to find his purpose.

In this book – and the next for that matter – I found myself frequently wondering about my own purpose. The book was funny sometimes and others it was deeply emotional. It and its sequel have to be a few of the best books I’ve ever read. I can’t even say much except you must read them. Anyone who doesn’t it is missing out on much, much more than they could expect.

I loved A Dog’s Purpose and its sequel as well, and I really enjoyed telling you about them. I strongly advise you, no matter who you are, read these books, and if you do, please tell me what you thought in the comments. I would love to hear what you guys think, so comment when you can. I love to hear from you!