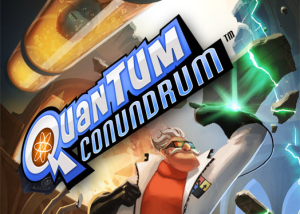 A new puzzle game from Kim Swift, the same woman who came up with Portal, stuns me with its brilliance! I’m a big fanatic about the Portal series and I find it hard to stand equal to the sheer amazingness of it. However, Quantum Conundrum’s innovative gameplay and similarity to Portal surprised me. I’m not entirely done with the game yet, but I’m very pleased with what I've seen so far. I’m glad I get to review this!

The story is relatively simple. You’re visiting your uncle Professor Quadwrangle, an amazing scientist and inventor who always has an amazing new invention anytime you visit. However, this time when you get there, his voice is only present over a loudspeaker, claiming he is working in his laboratory. Just then, there is an explosion, and the power defaults to backup energy. Quadwrangle eventually comes back on and claims he is in an odd sort of pocket dimension with short-term memory loss so he has no idea why he is there. You have to work your way through his mansion and restore power to three generators, turning the house’s energy back on, and ultimately find out where Quadwrangle is.

The real ingenuity here, though, is the gameplay. You use Quadwrangle’s Inter-Dimensional Shift (IDS) device to work your way through the manor. The IDS device allows you to shift between various different dimensions, which are exactly parallel to each other except for one minor difference, so it’s like changing a property of the objects around you. It’s a bit hard to understand unless you play the game. In example, the fluffy dimension makes everything pink and fuzzy, and thereby ten times lighter. The slow motion dimension makes everything move in slow motion, and so on. This mechanic allows for some very intricate puzzles, spiced up with a bit of humor from your uncle (and the death screens, which show one humorous thing you will never do because of your death.) Other than some minor darkness in the death screens (no explicitness, but the death messages use dark humor), this game is perfectly acceptable for all ages, provided they are smart and patient enough to conquer the puzzles.

This game is amazing. It isn’t as humorous as Portal, though it is quite humorous, and the execution isn’t quite as amazing, but the game’s mechanics make up for that by supplying the exact same ingenuity and smart design as the Portal series. It’s available on the PS3 online store and the Xbox market as well as on PC on Steam. I highly recommend this game to anyone looking for a challenging puzzle game, but that’s just my opinion. Play the game and tell me about it in the comments. I love to hear from you!