The Seventh Tower: The Fall Review 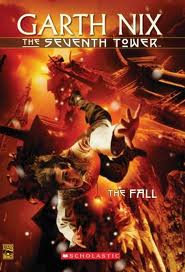 Hey, everyone! Today I’ll be reviewing The Seventh Tower: The Fall, by Garth Nix. A story of magic and shadows, this book quickly became a favorite of my collection. Here, I’ll detail the plot, and why, in general, I like the book.

The story follows Tal, a young Chosen just short of thirteen and three quarters, the age when the Day of Ascension takes place and he can enter the spirit world of Aenir and get his own Spiritshadow. But there’s one problem – a Primary Sunstone is needed to go there, and he doesn’t have one! The only one of his family who had one of those was his father, and he got lost in a mission for the Empress. In addition, his mother is gravely ill, but if Tal can get her to Aenir, they can cure her. He has to get a Primary Sunstone!

After several failed attempts to get one, he tries stealing it from the Seventh Tower, the last of the seven towers in the Castle which tower above the Veil. However, a strange Spiritshadow scares him off the Tower! He is saved by his Shadowguard (a less powerful version of a Spiritshadow), but they end up on the Ice far from the Castle, and are found by a clan of Icecarls. They decide to help him to get to the Castle, if he steals a Sunstone for them as well, since theirs’ is failing. Joining him on the quest to the Castle is Milla, an Icecarl girl who considers him an intruder and wants to kill him. This will be quite a quest, huh?

I’ve always been into fantasy novels, and this is one of my favorites. I remember going to the book store and buying a book which comprises volumes 1-3 of The Seventh Tower, of which there are six volumes. I am currently on volume two, and enjoying it even more than the last one. I strongly encourage this book, and hope you go and get it.

Now, I’d love to hear what you say. So, if you go and get it, do me a favor and post what you think of it in the comments. I love to hear from you. Until then, see you next time!