The Irony of the Architect

Randall stepped into his apartment, glad to finally be finished with his conference. As an architect, Randall seemed to be constantly pressured to get everything right. That day, he had been charged with creating a large bridge with just the right design that would hold itself over the ocean area it was to go over without crumbling into the water. There are so many designs to choose from, thought Randall, and I have to pick the exact correct one on my first try!

Despite these grievances, Randall realized it made sense. Randall understood that he was the most respected architect in the company and if anybody could build the bridge, he could. He knew he should have confidence in his abilities, but nevertheless he was worried. What if I mess up? Randall worried in his mind. What if the first one to cross the bridge goes tumbling into the water?

Randall cast his thoughts aside and sat on the couch. He had been put under a lot of pressure and he figured he deserved a break. The man grabbed for the remote and turned on the television. A short break, he thought, and then I’ll get to work on that bridge.

After an episode of Spongebob Squarepants (secretly his favorite television show), Randall began designing his bridge. For the next several days, he worked desperately at making the perfect bridge. On the third day, Randall’s friend Terry came to him while he was working and took a look at his design. 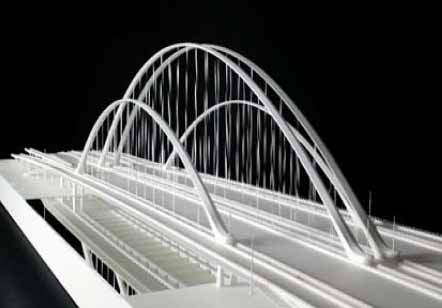 “Randall, this is a good design,” said Terry, “but there’s a flaw here in the support. See that weak spot?” He took a piece of paper and quickly sketched a different support. “This design compensates for that weak spot so a driver on the bridge doesn’t have the most dangerous free fall of all time.”

Randall, who was overwhelmed with the work he had to do, lashed out at Terry. “Don’t you see I’m trying to work?” he said, perhaps in a bit of a meaner tone than he intended. “Leave me alone!”

Terry was shocked by his friend’s behavior. He slowly trudged out of the room. Randall angrily went back to work.

In observing the spot Terry had pointed out, Randall realized that Terry was right. A driver driving through that spot would die easily. He slightly adjusted the support to cover this spot and then went back to work.

A few months later, his design had been built into a huge bridge. Randall was proud of his creation, and decided to be the first to go across the bridge. The bridge looked sturdy enough and he decided to put his life in the hands of his craftsmanship.

The day the bridge opened, Randall got into his car and got ready to drive over the bridge. He saw Terry, his old friend, on the sidewalk, watching. Terry still had a glint in his eye that indicated he was angry but another emotion seemed to be present as well. That emotion was worry.

Randall ignored Terry and fired his car up. He slowly accelerated the car onto the bridge and was overwhelmed with pride as his car’s tires became the first to touch the newly formed bridge that he had designed. Excited, Randall accelerated a bit and opened his windows, eager to feel the wind on his face in light of his victory.

Then Randall was suddenly falling. He felt his car tumble hundreds of feet into the water. He looked out the window and above him. The car had tumbled through an unsupported part of the bridge. Randall was falling, and he was going to die.

Overcome with grief, Randall threw the car door open and leaped out of the car. He decided that if he was going to die, he would die in the open air and not in the enclosed space of the car. He fell with his back facing the water, so he could see the bridge. In the few seconds before impact, he realized that the weak spot he had fallen through was the one Terry had pointed out, the one he had tried to compensate for. However, taking a quick glance around the structure, he realized that Terry’s structure would have covered the deadly spot but he probably would have survived with his original support system anyway. A few bricks would have tumbled down, nothing more. His failed attempt at compensation had killed him.

In his very last second of survival, Randall learned a valuable lesson. He should have listened to Terry instead of shooing him off. His failure to know this would lead to his death.

I’m sorry, Terry, thought Randall. Then, he felt impact and was killed instantly. Above him hung his empty car, caught by a leftover net from development, deployed by the architects to save Randall’s life.

One Response to The Irony of the Architect