The news of my leaving town spread quickly in Kakariko Village, and by the time my parents were taking me out of the village, the villagers were lined up at the gate, cheering me on. Apparently, word somehow got out that I was going on a quest to stop Ganondorf (again), so they were cheering, “Go, Link!” “Put Ganon in his place!” and “We’re counting on you!” My neighbors are easily excitable.

Somehow, my parents had gotten their hands on a horse-drawn carriage, and soon, we were zooming through Hyrule Field toward Lon Lon Ranch. Even at our speed, though, the trip would take at least half an hour, so I definitely had plenty of time to look around at the natural wonders around me. I also saw a not-so-natural wonder – Hyrule Castle, looming in the distance. It looked so majestic – could it really need saving?

Near the end of the trip, I decided that then was a good time to take out my ocarina and practice Zelda’s Lullaby. As soon as I began playing, I attracted Navi’s attention. “Link – where did you get that?!” she asked. 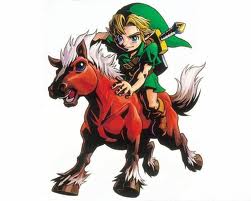 “I inherited it from my grandfather. Why?”
“Link, don’t you have any idea what that is? It’s the Ocarina of-”

She was cut short by the carriage’s sudden stop, followed by my father shouting, “We’ve arrived!”

I jumped out of the carriage and looked at Lon Lon ranch. It had a few buildings – a house, a barn, and a stall – and was on a raised platform. I also saw a fenced-in area for practicing riding the horses.

“Giddy up!” said my father, and they were riding away. “Goodbye!” they yelled. “Goodbye!” I waited until they were too far away to see before turning around and walking up the steps to the elevated Lon Lon Ranch.

When I made it up the steps, the first thing I saw was a beautiful girl, about my age, singing. I paused once I saw her, unable to move. I shook my head. Snap out of it, I thought. You’re on a mission. Still, I couldn’t help but stare at her. Then, she saw me and came running toward me.

“Link?!” Her eyes grew wide. “Auntie Malon talks about you all the time! You’re the hero of time!”

“Huh? Oh, no, that’s my grandfather. He passed away a few weeks ago.”

“It’s okay. Listen, I need your help. I need to talk to the person in charge.”

Her eyes lit up again, and a smile came across her face. “That would be my father, Taryn. Come on, hurry up!” She dragged me by my hand toward the house.

Both looked up. The woman looked surprised and filled with recognition, but the man (supposedly Taryn) just looked confused.

“Who’s that?” Taryn asked. “Why have you brought ‘im here, Marilyn?”

The woman looked even more surprised. “Link? It can’t be!”

I rolled my eyes. First Marilyn, now her? Would I have to explain this to everyone? “Ma’am, I’m not the hero of time, if that’s what you think. I’m his grandson. He died a while back.”

“Oh… I’m so sorry. My name is Malon. This is my nephew, Taryn.” She gestured at Taryn. “And Marilyn is his daughter. They’ve taken over the ranch since I became too old to care for it. I believe your grandfather mentioned you about ten years ago, when you were two. What did he say?” She looked upward wonderingly. “It was important…”

“I believe he said that you would lend me a horse. A fast one,” I said.

“Oh, yes. One that would fit your size. At first, I was worried about finding a good horse, but as it turns out, we now have just what you need.”

She stood up. “Come,” she said. Taryn, Marilyn, and I followed her outside, to the fenced in area.

Malon said, “Marilyn, could you be a dear and sing the song?”

“Certainly.” She opened her mouth and begun to sing, not lyrics, just a series of musical notes. The song sounded like something I may be able to play on my ocarina.

I heard a loud whinny and turned my head in the direction of the noise. Over came a young horse, at what would seem like full speed. As I would soon find out, though, it was but a comfortable cruising speed.

Malon opened the fence and gestured me to come through and get on the horse. Everyone followed me inside and watched as I climbed aboard the mare.

Taryn said, “Her name’s Epona. We named here after her grandmother horse. That old girl, she used to be yer grandfather’s. He gave her back to us after he retired from adventurin’. To get ‘er goin’, jus’ click yer tongue.” He clicked his own tongue, demonstrating.

“Okay…” I said warily. I clicked my tongue as instructed, and Epona started a slow gallop.

It was the first time I’d ever ridden a horse, and I got caught up in the moment. “Woo-hoo! Full speed!”

Their warnings came too late. Epona came to a speed I could never have expected, going in circles around the fenced in area. I was nearly swept off the speeding horse.

“Stop, Epona, stop!” I yelled. She was running and turning so quickly that it took all I could to hold on the reigns. “Quit! Halt! Freeze! What do I need to do to get you to stop?!?” Then, I managed to remember what every person would yell in every book I’d every read to stop their horse. “Woah!”

I pulled back on the reigns as I yelled, and she stopped.

Taryn, Marilyn, and Malon came running over. “Are you okay?” asked Marilyn.

I got down from the horse and told them, “I’ll leave the ‘full speed’ order in reserve from now on.”

“Good idea,” said Malon. “Now, listen, that song that Marilyn sung to summon the horse can be played at any time to make her come to you, wherever you are. But I think the notes are a little too high for your voice! Do you have any type of instrument to play it with?”

“As a matter of fact, I do!” I said. I took out the ocarina and begun to play the song off memory. Was it – glowing? Again?

I finished the song and was applauded. Navi appeared. “Link, you hold much more power in your hand than you know. Don’t you know that that ocarina is the Ocarina of T-“

“A fly!” yelled Malon, pointing at Navi. She produced a fly swatter and begun to chase Navi.

We watched for a few minutes, amused, then I got back on Epona, a little scared but determined to reach my goal.

I looked at her, a girl my age but young at heart, and smiled. “Absolutely.”