How to Stop Bullying 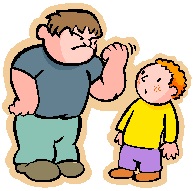 It’s time we stopped bullying – together, as one. There are different steps to doing this, in a particular order. I’m going to give them to you. Now, I know that you’re thinking that these won’t work, because nothing else had. But when a bully’s annoying me, this is what I do, and it works! And if we all do this, then eventually, hopefully, bullying will go away forever. Here are my steps:

First, ask them nicely to stop. If this step works, then the person probably wasn’t bullying you at all, just playfully teasing. If they know you don’t like it, they’ll stop. This step won’t work on actual bullies, though. They want you to be upset. You should still try this, though, in case the person is actually just messing around. If this doesn’t work, go on to the next step.

The next step is simply ignoring them. I know, this is probably a step you’ve tried that never works, but there’s more. Don’t just ignore what they do, ignore them completely. You probably just try to let the insults brush off of you, and consider that ignoring. It’s not. Just pretend they aren’t there at all, for weeks on end if you need to. Eventually, they’ll want your attention… bad. Even if that means being nice to get it.

Under most circumstances, just keep using the second step and you will most likely see results. However, if they say something truly insulting, right to the core, or actually physically attack you, move on to this step… tell an adult. It will work, amazingly. They’ll eventually get straightened out or at least told not to talk to you anymore. Note that this is the step you use immediately if the person was physically bullying you. If you were punched, or kicked, or something else of the like, tell someone. It’s important that an adult knows about this.

Those are my three steps to a bully-free lifestyle. Amazingly, they work surprisingly well, if you follow them exactly. The second step is the most important. You must ignore them, for days, or weeks, or even months. Eventually, they’ll crack. They always do. But I want to hear from you know. Try these strategies, and post the results in the comments. If you come up with other ways to handle bullies, post them, too. I love to hear from you!

Tagged bullying, how to, stop. Bookmark the permalink.

One Response to How to Stop Bullying